Legend on the genesis of Temple 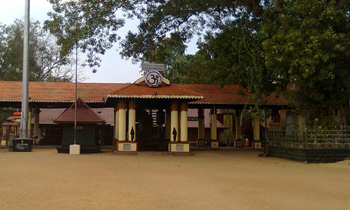 There are many popular tales (Aithihyams) related to the origin of Chettikulangara temple. The most popular one is as follows. Many centuries ago, some local chieftains went to witness the annual festivities at the Koypallikarazhma Bhagavathi temple situated a few kilometers from Chettikulangara.

The visitors were humiliated and ridiculed by the Koypallikarazhma temple authorities and the village chieftains there. Perturbed by the humiliation, and out of retribution, they decided to construct a Bhagavathi temple at Chettikulangara. People of Chettikulangara united for this cause, and headed by the Karanavars (Family Heads) of the four to five then leading families of the region decided to seek the blessings of Kodungallur Bhagavathi in this mission. They embarked on a pilgrimage visiting various temples enroute and reached Kodungallur, and performed 12 days long ‘Bhajanam’ to please the Goddeess.

It is said that the Devi gave them ‘Swapna Darshanam’ to say that she would soon come to Chettikulangara. Next day, they happily returned to Chettikulangara with a sacred sword given by the Velichappadu of Kodungallur temple, and started civil works of the temple.

A few days later, while the local boatman (Kadathukaran) of the nearby Karippuzha rivulet was winding up his work on a late evening, he heard an old woman requesting his help to ferry her to the other shore. He felt it was his duty to help this lonely lady, and decided to accompany her to Chettikulangara, the destination she was said to be heading for. On the way, they took rest beneath a wayside tree (the place now houses the Puthusseriambalam temple), and the Kadathukaran brought food for them from a nearby house. Soon he fell asleep, and when he woke up by early daybreak, the lady had vanished. (It is said that this boatman was a Christian, and for helping Devi to ferry across the Karippuzha thodu, the descendents of his family were entrusted with the job of ‘Vedi’,- (ritual fireworks at the temple).

The next day, annual maintenance works on thatched roof was going on at the Illam, (the traditional house where a community of Brahmins in central Kerala reside) adjacent to the present temple. While the Antharjanam of the house was serving the traditional local dishes like Rice Kanji, Muthirapuzhukku (a local special dish with ingredients of baked Horse Gram cereal and kneaded coconut) and Asthram (another side dish, a paste of different locally procured vegetables) for the workers, a strange old woman joined them for lunch. Soon after the food, the old lady moved to the western side of the house, and vanished in thin air with a bright glow. Antharjanam witnessed this, and she fell unconscious. Later she elaborated her experience to the people.

The same day, Devi showed her presence to the village chieftains in their Swapna Darshanam. They approached famous astrologers, and in ‘Prasna Chintha’, it was confirmed that the Bhagavathi had reached Chettikulangara.

A meeting with Bhagavathy

Another legend related with one Kunju Varkey, a descendent of the traditional Vedi Vazhupadu family, is also popular. Like his predecessors, he was also a staunch believer in Bhagavathi.

On the day after one Meena Bharani, he was visited by a group of his community to entrust him with the task of fireworks at the local church festivities. He diverted them to his brother, also an expert in fireworks, saying that he has to perform the traditional Vedi Vazhupadu while Bhagavathi returns to Chettikulangara. One of them ridiculed him and remarked whether he could witness Bhagavathi’s return from the tall Banyan tree adjacent to the temple. Kunju Varkey contemplated this, and out of curiosity, climbed up the tree in the night to secretly watch Bhagavathy’s return from Kodungallur. By early dawn, he saw a bright radiance approaching the temple at lightning speed, and could hear the sound of her Thala bangles. Bewitched and unable to withstand the sight, he fell down unconscious and soon lost his eyesight.

Normally, the temple remains closed the next day of Meenabharani, the day of Bhagavathi’s visit to Kodungallur. Her return is confirmed by the broken branch of the Banyan tree in front of the temple. 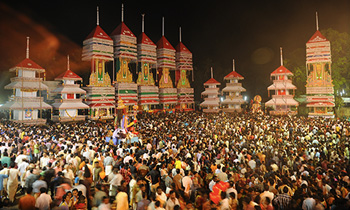 Kumbhabharani KettukazhchaMany historians cite that the famous Chettikulangara Kettukazhcha in the present form is not more than 180 to 200 years old, and was started during the early part of the 19th century.

According to a popular legend, a group of village chieftains and their workers went for civil works to construct the Kollam – Chavara Thodu (canal), about 50 kms away from Chettikulangara, in accordance to the decision from the then ruler of the region. But they could not return to their native place due to the unforeseen inordinate delay in completion of the canal. They pleaded with the authorities, but their request was turned down. During the period, they got an opportunity to visit the temple festivities at Kollam Mulankagakam temple, and were attracted by the Kettukazhcha there. They vowed to their local deity Chettikulangara Bhagavathy, that they would construct Kettukazhchas for her every year, if they were allowed to leave for Chettkulangara immediately.

To their surspise, they were allowed to return to Chettikulangara the very next day, and as promised, they made huge Kettukazhchas and took them to their Bhagavathy’s premises. (Details of Kettukazhcha in section – Kettukazhcha…)

There are many legends and testimony to prove the powers and presence of Chettikulangara Bhagavathy. One popular legend is related to an incident during her Parayeduppu in the Kayamkulam region, which normally falls on the Makayiram day after Kumbha Bharani.

Once, while the Bhagavathi was touring the Kayamkulam side, a local chieftain of the Krishnapuram area was farming Sesame at his Kandam (a piece of farmland), along with his workers. They could hear the accompanying Vadyams of Bhagavathy’s entourage at least two to three miles away. The work was about to be finished in a few minutes, and normally it would take at least half to one hour to cover the distance from where the sound was heard. The chieftain jokingly remarked that ‘ If this Bhagavathy has so much powers, she should come here before we finish our work. If so, I shall give her a ‘Para’ here itself’. Within a few seconds, they could hear the approaching Bhagavathy. The Poojaris who carry the Jeevatha (Devi’s palanquin vehicle) were possessed by mystic powers and they ran towards the Kandam within split seconds. Soon, rest of the entourage also emerged at the scene.

The Chieftain was thunderstruck and amazed by the powers of Bhagavathi, and became a firm devotee. He immediately submitted a portion of the Kandam to Bhagavathy, and now this place is known as Bhagavathy Kandam.

Typical to other Bhadrakali temples and legends on Vasuri Mala, Chettikulangara also has similar tales to tell. It is believed that Chettikulangara Amma visits her mother Kodungallur Bhagavathi every year to participate in the Meena Bharani celebrations there.

There is a popular legend related to the genesis of Thottampattu at this temple.

Many centuries ago, a traveller from a distant place reached Chettikulangara and spent the evening at the Aalthara ( a rest place surrounding a banyan tree) in front of the temple. During day break, he sung enchanting songs in his beautiful voice. Soon a very beautiful lady emerged from the temple and asked him to sing a few songs in praise of Bhagavathi. Since it was unnatural to have a lady like her at the temple at that hour, he enquired who she was. Bhagavathi showed him her ‘Viswaroopam’ (original self). The traveller was bewitched by her presence and bowed to seek her blessings.

She asked him to show his tounge, and wrote something with her Soolam ( a short sword with three forks and a long handle, the weapon of Bhadrakali). He wrote songs on Bhagavathy and sung them in front of the temple. Still, the descendants of his family visit here to sing Thottampattu without fail during the Ethirelppu festival time.